Art Nouveau, a style that graphic designers should be familiar with. This first international creation has been growing from sometime in Europe since 1880 to 1920.

The ornamental art, which promoted lines, illustrations of flowers, bud and leaf bone, as well as women figures, also flourished in England. It was first introduced by William Morris. 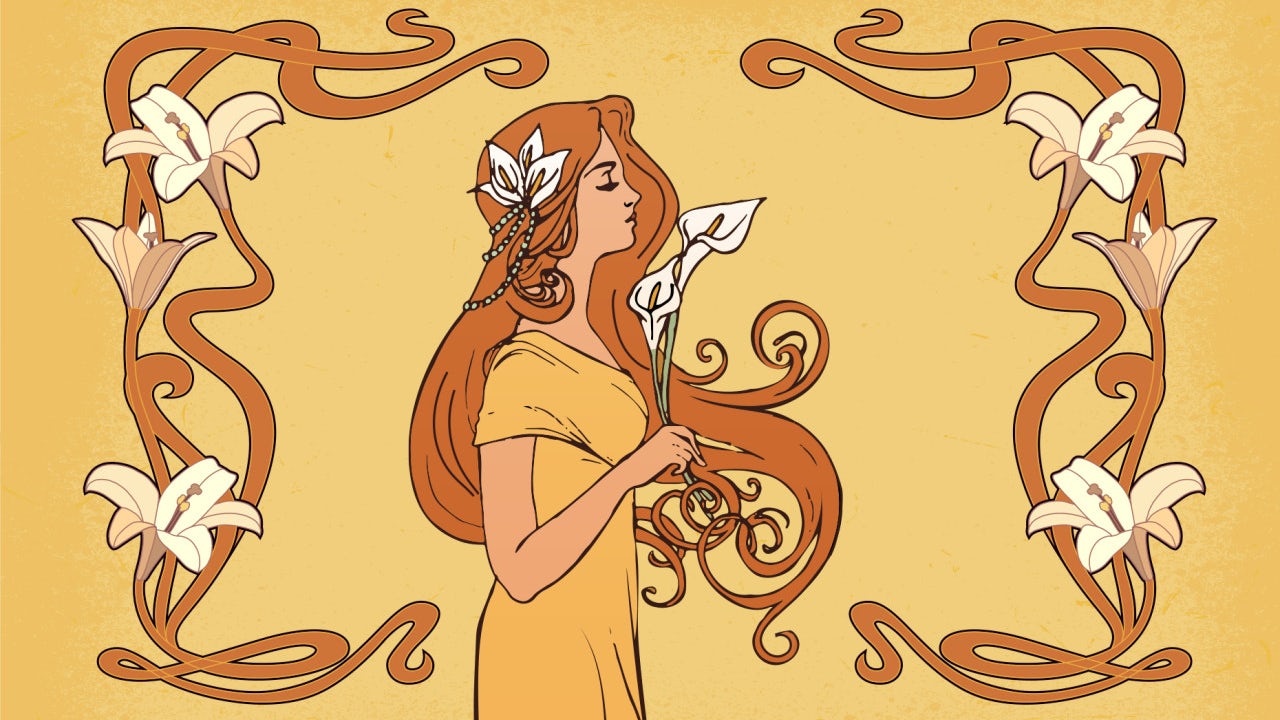 The History of Art Nouveau Style

This design was a deliberate attempt, done by the artists, to rebel against art academic creations. Some of them even withdrew themselves and stopped creating artworks.

When, finally, William Morris came with a new style, his first book was titled Red House of Morris in 1859. The design even appeared on one of art gallery collections in France.

Siegfried Bing, founder of the art gallery named Maison de Deplacement Nouveau, where the Art Nouveau term started to be used among artists.

There was also Tiffany, who developed Art Nouveau with her glassware designs. About this time the design began to be known and grew while needing no time for almost the whole world to try it.

Art Nouveau continued on making swift progress, particularly after the popular artist Alphonse Mucha, popularized this design in his advertisements. More products were also seen to adapt the style.

From cigarettes to sugar, and alcohol. They didn’t waste any opportunities to apply for it. Accordingly, the world starts creating their own creations. Apart from the ads, annual exhibitions also gave them more spaces to elevate.

This is where the development of asymmetrical yet beautiful designs continues to be depicted. Such as the work of Edward Burne-Jones and Dante Gabriel Rosseti that support Pra-Raphaelite ideology.

One interesting point from Art Nouveau is the similar creations coming from different professions, be it architects, artists, jewelry designers, engravers and sculptors. They intentionally steal the design ideas and turn them into beautiful artworks.

The term total work of art was derived from that moment, which was called differently in Germany; Gesamkuntswerk. It was Richard Wagner, a composer, who first used this term.

The artists believe that different art forms correspond to each other. While a great creation possibly comes from any ideas.

Having a solid grasp of Art Nouveau characteristics is essential. You would easily make one after a few adjustments done.

These followings are some features you need to know:

Can We Make Our Own at Home?

In general, art nouveau design is fairly simple to work with because the characteristics tell you where to start. It tends to be a freely boundless design.

The details, however, need more development. For example, exploring the beauty of women the way Mucha style did where their feminine lies in the middle.

The style led the audiences to focus on admiring the women’s face or feminine body. While applying  nature-inspired color patterns, offering warmth.

In addition, you should have a firm grip of creating typography to get curved line features. Avoid getting abstract fonts that are nearly illegible.

Moreover, having Art Nouveau on a product advertisement. Makes the audiences familiar with the product’s name before adding readable small-sized descriptive text.

Similar to that of art, this style doesn’t particularly work on advertisement posters, but is also perfect for attractive wedding or birthday invitations, assuming the combination is well-matched.

Designs distinctively develop across the world, in European for instance. Their artists’ biggest influence comes from Paul Gauguin and Henri de Toulouse-Lautrec artworks with the linear patterns of Japanese.

In the 20th century, however, Art Nouveau was rather dimmed, due to the newly discovered advanced technology. It wasn’t completely abandoned though, just the patterns that started to be affected.

The nations’ cultures is one of influences that steadily shows acculturation. It only happened after the World War, making the arts combined or inspired by one another.

This phenomenon makes Art Nouveau seem to rise and fall, while the ideas are adapted with certain elements only. Its adaptations are easily recognized anywhere across Europe.

Such as Barcelona, Spain with Antoni Gaudi artworks which its modernist architecture was quite famous. Some artists in other regions also made their contributions.

We have Alfons Mucha from Czech Republic who is known for the mucha style and Liberty & Co from London. That is how they portrayed the Arts and Crafts movement.

Did Art Nouveau arrive in Indonesia?

This design hasn’t received much attention yet in Indonesia. However, there is one adaptation work that is being maintained for their trademark.

It is the furniture craving from Jepara. Some of their artists tried to add the Nouveau touch with curved lines and also inspired by nature. Such as twisting tendrils plants.

The design was initially brought by P.A.J Moijen in 1905 when artworks were influenced by European style, during the Dutch colonialism.

Furthermore, Portuguese and England also once colonized Indonesia. Their influence on art was fairly dominating till today.

This design’s characteristics are easily adjusted to different artworks. Not only on paintings, but also other works.

Moreover, there were only a few rules regulating the patterns used and we can combine them with others. Most audiences are amazed by its prominent vibes coming from the classic creations.

It is indeed fascinating to learn about how the design spreads from Europe to many different countries. The design process wouldn’t be that challenging if we use curved lines and art-themed Art Nouveau to our advantage, aiming for an extraordinary work.